BrewDog has described itself as a “post-punk, apocalyptic, motherfucker of a craft brewery” and urged its customers to “ride toward anarchy”. Its slogans include “In hops we trust,” “This is the revolution – so help me Dog,” and “Changing the world, one glass at a time.” It has a document that it calls its charter, which contains phrases such as: “We bleed craft beer,” “We blow shit up, and “Without us, we are nothing. We are BrewDog.”

BrewDog embodies, in short, much about modern life that many people love to hate, particularly in their brazen commentary, evocative imagery and persistence online.  It has successfully, in my opinion commanded the lion share of voice in the craft beer movement in Britain. Their positioning is aimed to arouse a reaction – be it positive or negative…to be talked about, top of mind and that high penetration of engagement is coveted by their competitors (particularly the big drink manufacturers)

For all the annoyance at their strategically deployed antics, BrewDog have built a wildly successful business on the loud and repeated pronouncement of their own authenticity: that all they truly care about is their beer.

Has this strategy paid off? Quite simply, YES

Over the past 4 years, Brewdog has been the fastest-growing food and drinks producer in Britain, and the fastest-growing bar and restaurant operator. Since it was founded, less than nine years ago, BrewDog has grown from two employees to 580. It has opened 30-odd highly successful bars – bare brick, exposed ironwork, spray-painted graffiti – across the UK, from Aberdeen to Bristol and Manchester to Clerkenwell. And there are 15 more around the world: Helsinki, Tokyo, Rome, São Paulo. Last year, the company’s sales grew by more than 50%, to £45m – more than half booked abroad – BrewDog now exports to more than 50 countries. Solidly profitable every year since its inception, BrewDog’s trading profit hit £5.5m in 2015.

An example of their brilliance

In 2010, Brewdog was responsible for the brewing of ‘The End of History’ aptly named after Francis Fukuyama’s book which was heralded to be 55% alcohol-by-volume – stronger than most whiskies, vodkas and gins. It sold in a limited run of 11 bottles, each artfully stuffed inside a deceased wild animal – seven stoats, four grey squirrels – costing between £500 and £700. 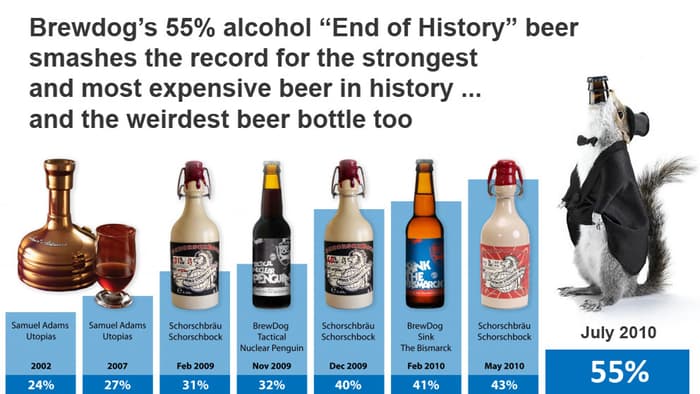 One of the brewery’s two founders, James Watt, pronounced the drink “an audacious blend of eccentricity, artistry and rebellion”. In their “striking packaging”, Watt said, the bottles were “disrupting conventions and breaking taboos – just like the beer they hold within them”. 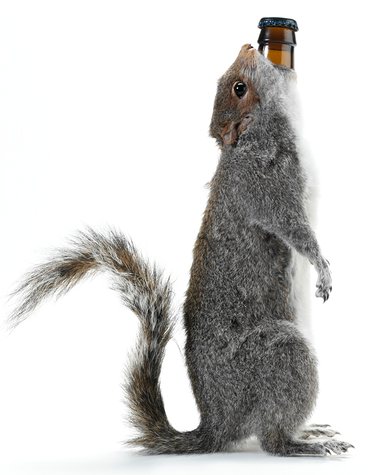 A bottle of The End of History beer inside a stuffed grey squirrel. Photograph: Dave Branfield/Brewdog

More recently, the company’s flagship Punk IPA – the biggest-selling craft beer in the UK and Scandinavia extends their value proposition.

Watts, one of the founders of Brewdog has published a book titled ‘Business for Punks’ and provides invaluable advice on secrets to Brewdog’s marketing success.

“you cannot control your brand, only influence people’s perceptions of it…in today’s interconnected digital world, full of savvy Gen Y consumers, every single thing you do is marketing.” Not having a budget for it is “not a problem. In fact, it’s a massive advantage.”

Traditional advertising is dead, and in any case unaffordable for a small company (“You’d be better off blow-torching your cash,” says Watt). Mass media is “as ignorant as it is irrelevant”. New media is where it’s at.

People, Watt writes, “want genuine, they want quality, they want passionate, they want real, they want integrity”. In short, he argues, in the modern era, “The only way to build a brand is to live that brand. You have to live the values and the mission, then let the customer decide.”

Their marketing has over the last few years has matured yet still loudly antagonises the drinks “establishment” cementing themselves as a market disruptor.

Fiercely independent, at least for now

When Camden Town, a small brewery sold to SAB Miller, the response by BrewDog yet again highlighted a consistent irreverence to the big global players. BrewDog, which also sells what it considers the best of many other small, independent craft breweries in its bars, promptly dropped Camden Town. BrewDog bar in Camden posted a video on Twitter demonstrating yet again that BrewDog will never sell out to some monolithic drinks giant.

As craft beer market increases in total share, it will be fascinating as to whether BrewDog can continue to hold out from being absorbed into and quite possibly muzzled by the bigger players in the market.

Read more about this amazing story at The Guardian

Alisdair Blackman, Owner and Principal of Digital Rehab owns Mojo Record Bar and Easy Eight – both of these Sydney bars pioneer and support the independence of craft breweries

Other Articles on What We Think

Need for action-oriented decision-making and agility

Project, Change & Transformation: Stress & Fatigue Management
So why wait? Meet with us to discuss your requirements. Contact us today!